Will Holsinger is an author, attorney and artist, not necessarily in that order. This website is devoted to his personal reflections and writings, focusing on his book A Life Well Lived, A Death Well Met and on his Feathers and Found Things, creations from feathers, driftwood, crystals and other “found things.”

A Life Well Lived, A Death Well Met is a collection of insightful and compassionate poems, musings and insights about aging, death and dying that draws on the author’s lifetime of experiences, including his own vivid near-death experience as a young boy, the deaths of his parents and he still birth of a child, as well as the passion of the many friends and hospice patients he has accompanied in their final days and months and hours.

Feathers and Found Things is patterned on the indigenous American tradition of gifting.

In Native American culture, giving is not only understood to be reciprocal,
but is also an honor; as much as it is an honor to give, it is equally an honor
to receive. Because it is such an honor to receive, there is also, in turn, an
obligation to give … Thus, the Native American idea of giving and receiving
is cyclical. (learningtogive.org)

Feathers have magical and symbolic power and meaning. In indigenous American tradition, they are believed to carry and imbue the recipient with a bird’s positive qualities and are also considered to be spirit guides. A white feather is a symbol of peace. Raven feathers symbolize creation and knowledge. To be given a feather is considered to be a recognized and honored. In many Asian cultures, birds (and as a result their feathers) have important meanings. Red rooster feathers bring luck and good fortune, for example, while white feathers are thought to bring loving messages from ancestors. Feathers and their colors are also sometimes correlated to the energy chakras of the body.

Will Holsinger began creating what he refers to as “Peace Feathers” to present as gifts to family and friends. These are feathers of different kinds wrapped in leather lace with different crystals, each one a unique creation. He also uses driftwood and other “found” pieces in his creations. These creations are now available for purchase. 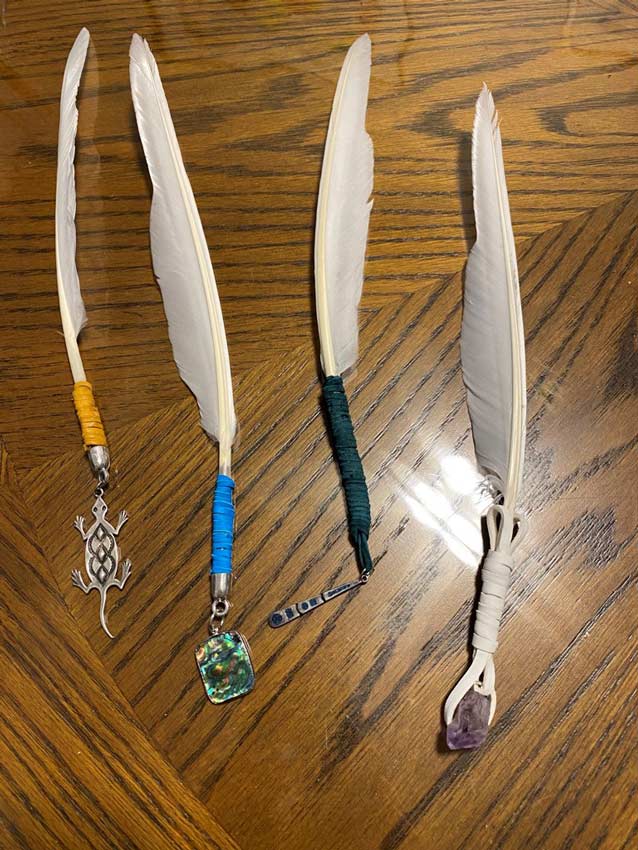 A found thing, or object, is a natural or man-made object, or fragment of an object, that is found (or sometimes bought) by an artist and used in a new way because of some intrinsic interest the artist sees in it.

In the near future, this website will undergo changes to provide information and examples of Will Holsinger’s Feathers and Found Things creations, along with some of the folklore and meanings associated with different feathers and crystals. Poetry, prose and other musings about aging, death and dying will continue to be posted.

Contact Will Holsinger to see what creations are now available.